How Exercise Can Keep the Brain Fit 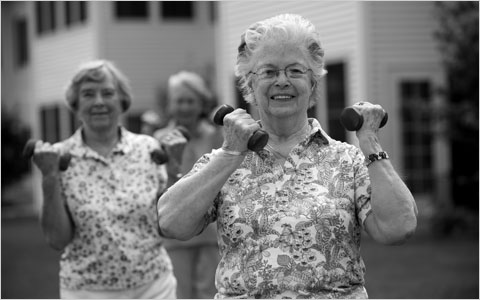 For those of us hoping to keep our brains fit and healthy well into middle age and beyond, the latest science offers some reassurance. Activity appears to be critical, though scientists have yet to prove that exercise can ward off serious problems like Alzheimer’s disease. But what about the more mundane, creeping memory loss that begins about the time our 30s recede, when car keys and people’s names evaporate? It’s not Alzheimer’s, but it’s worrying. Can activity ameliorate its slow advance — and maintain vocabulary retrieval skills, so that the word “ameliorate” leaps to mind when needed?
Obligingly, a number of important new studies have just been published that address those very questions. In perhaps the most encouraging of these, Canadian researchers measured the energy expenditure and cognitive functioning of a large group of elderly adults over the course of two to five years. Most of the volunteers did not exercise, per se, and almost none worked out vigorously. Their activities generally consisted of “walking around the block, cooking, gardening, cleaning and that sort of thing,” said Laura Middleton, an associate professor at the University of Waterloo in Ontario and lead author of the study, which was published last week in Archives of Internal Medicine.
But even so, the effects of this modest activity on the brain were remarkable, Dr. Middleton said. While the wholly sedentary volunteers, and there were many of these, scored significantly worse over the years on tests of cognitive function, the most active group showed little decline. About 90 percent of those with the greatest daily energy expenditure could think and remember just about as well, year after year.

“Our results indicate that vigorous exercise isn’t necessary” to protect your mind, Dr. Middleton said. “I think that’s exciting. It might inspire people who would be intimidated about the idea of quote-unquote exercising to just get up and move.”
The same message emerged from another study published last week in the same journal. In it, women, most in their 70s, with vascular disease or multiple risk factors for developing that condition completed cognitive tests and surveys of their activities over a period of five years. Again, they were not spry. There were no marathon runners among them. The most active walked. But there was “a decreasing rate of cognitive decline” among the active group, the authors wrote. Their ability to remember and think did still diminish, but not as rapidly as among the sedentary.
“If an inactive 70-year-old is heading toward dementia at 50 miles per hour, by the time she’s 75 or 76, she’s speeding there at 75 miles per hour,” said Jae H. Kang, an assistant professor of medicine at Brigham and Women’s Hospital at Harvard Medical School and senior author of the study. “But the active 76-year-olds in our study moved toward dementia at more like 50 miles per hour.” Walking and other light activity had bought them, essentially, five years of better brainpower.
“If we can push out the onset of dementia by 5, 10 or more years, that changes the dynamics of aging,” said Dr. Eric Larson, the vice president of research at Group Health Research Institute in Seattle and author of an editorial accompanying the two studies.
“None of us wants to lose our minds,” he said. So the growing body of science linking activity and improved mental functioning “is a wake-up call. We have to find ways to get everybody moving.”
Which makes one additional new study about exercise and the brain,published this month in Neurobiology of Aging, particularly appealing. For those among us, and they are many, who can’t get excited about going for walks or brisk gardening, scientists from the Aging, Mobility and Cognitive Neuroscience Laboratory at the University of British Columbia and other institutions have shown, for the first time, that light-duty weight training changes how well older women think and how blood flows within their brains. After 12 months of lifting weights twice a week, the women performed significantly better on tests of mental processing ability than a control group of women who completed a balance and toning program, while functional M.R.I. scans showed that portions of the brain that control such thinking were considerably more active in the weight trainers.
“We’re not trying to show that lifting weights is better than aerobic-style activity” for staving off cognitive decline, said Teresa Liu-Ambrose, an assistant professor at the university and study leader. “But it does appear to be a viable option, and if people enjoy it, as our participants did, and stick with it,” then more of us might be able, potentially, to ameliorate mental decline well into late life.
Posted by maggie@yogaplus at 2:23 PM No comments:

Here is an interesting article about snacking.


Posted by maggie@yogaplus at 7:28 PM No comments: